WHAT DO TRUCKERS DO WHEN SNOW ACCUMULATES ATOP THEIR TRAILER? 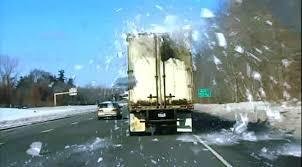 Snow is a main reason why so many Northerners end up moving South to places like Arizona, Texas and, of course, Florida. Snow is a nuisance, especially for people who have to drive in it. Take, for instance, truckers– what are they supposed to do about several inches of snow piled up atop their trailers? 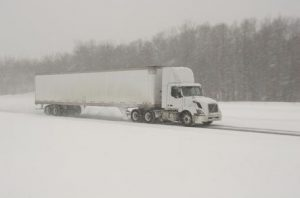 Did you know the average height of a semi-truck trailer is between 13 and 14 feet? Truckers have a lot of little details to worry about, so what are they supposed to do when snow accumulates way up there?

Most truckers will shrug and say, “We have no way to clean it off.” After all, you don’t see trailers with ladders off the side and giant brooms, right? While smaller trucking companies typically cannot afford steel trailer sweeps for the tops of their trailers, many companies do, indeed, have ways to get the snow off the roofs. In areas prone to snow, you’re likely to find “snow removal stations” for trucks and their trailers, though they’re not as ubiquitous as they should be. These look like archways which the trucker drives through, and they’re set up to scrape off the snow and ice from atop the trailers.

Why get rid of snow from trailer roofs? Well, for starters, most areas have laws, ordinances and codes that need to be followed, to the point where the trucker (or trucking company) will be fined if he or she doesn’t follow the rules. These rules are in place because people have determined that a whole bunch of snow (and ice) coming off of a moving truck can not only blind the drivers behind them, but also cause accidents and, unfortunately, deaths.

Most trucking companies realize that this issue is indeed an issue and it needs to be considered when the snow flies. Besides the issue of overall safety on the roads and highways, trucking companies don’t want to get fined up to $1,500, for example, because cops saw snow flying off their trucks, blinding drivers behind them.

Of course, as with anything, there are several questions raised with regards to snow atop truck trailer roofs. Chief among them is this: how much is too much snow up there? If it’s “just a half an inch,” which isn’t visible from below, is it a big deal? Also, who is liable for injuries or deaths if, say, a trucker falls while trying to clear his or her roof from snow and ice? Or if snow and ice from a truck causes a crash that involves lawsuits?

For now, ideally truckers will wait ‘til it melts before they get on the road, and/or utilize snow removal stations/equipment. Or, like most people, they’ll just drive with it and let it blow off as it may.7

You don't want to be these guys!!

Climbing on top of a trailer to clear snow

We have proof of concept on our portable trailer snow removal tool. Our device is unique, it remains with the driver, so after an all night stop where fresh snow has accumulated on the roof of the trailer, the driver can remove the snow from the trailer, without leaving the ground, before commencing the journey.

Cost - Less than a tire

An instructional video is coming soon!